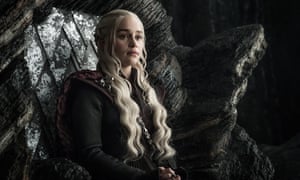 Emilia Clarke has revealed the culprit behind the errant coffee cup which made a viral cameo in the final season of Game of Thrones: co–star Conleth Hill. The British actor made the claim on Tonight With Jimmy Fallon on Wednesday, telling the late-night host that the actor who played Lord Varys in the HBO hit was responsible for the blunder.

The white takeaway cup made headlines around the world earlier this year, after being spotted during a feast scene in Winterfell castle in the episode The Last of the Starks. Clarke’s character Daenerys Targaryen was seated at a table close by, leading to a string of online memes about the mother of dragons’s fondness for caffeinated drinks. While it was later edited out, even HBO acknowledged the gaffe, with the official Game of Thrones Twitter account tweeting that the real mistake was that Daenerys had actually ordered a herbal tea and not a coffee.

Fellow Game of Thrones star Sophie Turner previously placed the blame on Clarke for the error on Fallon’s show back in May, but Clarke told Fallon that Hill had all but come clean at a pre-Emmys party: “He said, ‘I think it was [mine], I am sorry, darling. I didn’t want to say anything because it seemed the heat was very much on you.’”

Cupgate was a major talking point during the eighth and final season of the fantasy saga, with many outlets originally reporting it was a Starbucks cup, before it was identified as being from a local outlet close to where much of the series was filmed. With each episode costing in the region of $15m, you might have been forgiven for thinking such anachronisms would be few and far between, but a plastic bottle was also spotted in a later episode.

As well as its fair share of gaffes, the show’s ending was largely deemed a disappointment by fans and critics, with over a million viewers signing a petition calling for its ending to be remade. Meanwhile, news that a spin-off series starring Naomi Watts had been canned emerged on Tuesday, only for another prequel – House of the Dragon – to be announced just hours later.