Game of Thrones gives viewers a good friendship in the form of Jon Snow and Samwell Tarly, but the two aren’t as close as you would think. 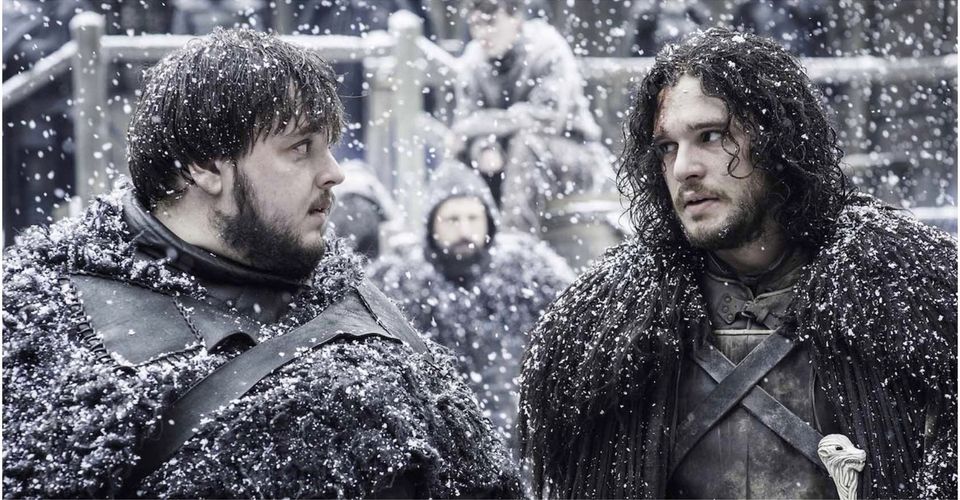 Jon Snow and Samwell Tarly became best friends and sworn brothers of the Night’s Watch in the first season of Game Of Thrones. Jon defended Sam against bullies at Castle Black and both characters fought on the battlefield against the White Walkers during “The Long Night.”

Jon and Sam haven’t always been great friends to each other, however. They have made decisions that have jeopardized their friendship and parted ways in the series finale for separate regions of Westeros. Here are ten reasons why Jon Snow and Samwell Tarly aren’t real friends.

Sam insists on fighting on the front lines during season eight’s “The Long Night” which almost has fatal consequences. Winterfell is decimated by the dead and the armies are overwhelmed. Jon makes a tough decision when he sees Sam being swarmed by wights and chooses to leave him to die so he can protect Bran.

Jon and Sam were brothers in the Night’s Watch but Jon still views Bran as family more than he does Samwell. He chooses Bran over Sam during the battle of Winterfell and leaves his best friend to die.

9. Sam Tells Jon About His Parentage To Spite Daenerys

Sam understandably has issues with Daenerys Targaryen in season eight. The Dragon Queen executed his father Randyll and brother Dickon with dragonfire after they refused to swear fealty. After discovering this, Sam immediately rushes to Jon to tell him the truth about his parentage and persuade him to pursue the throne.

Sam is Jon’s best friend but he doesn’t tell Jon the truth about his parentage out of love or concern. Instead, he tells him to get revenge on Daenerys and weaken her claim to the Iron Throne, urging Jon to go to war against his lover and ally.

8. He Didn’t Tell Anyone About Jon’s Parentage When It Mattered

It seemed as if Jon’s real parentage was going to be the biggest influence on the show’s endgame throughout Game Of Thrones. Viewers learn in season six that Jon is the son of Rhaegar Targaryen and Lyanna Stark and in season seven it is revealed that his parents were married, making him the trueborn heir of House Targaryen.

Sam doesn’t bring up Jon’s real parentage during the series finale when the council is discussing who should be king. He is content to let his friend return to the Wall whilst he stays in King’s Landing to serve the new king Bran Stark.

In the show, Sam is relatively happy about becoming the new maester for Castle Black and doesn’t object when Jon sends him to Oldtown with Gilly. In the books, however, Sam is much more reluctant. Having been abused by his father who mocked the maesters, Sam fears the scorn of his family and pleads with Jon to let him stay at the Wall.

Jon has to make several difficult decisions whilst leading the Night’s Watch, including sending Sam to Oldtown. In the books, he forces Gilly to take Mance Raydar’s son with her and leave her baby at Castle Black to protect the wildling prince from Melisandre.

6. Sam Nominated Jon For Lord Commander After He Asked Him Not To

Jon Snow is a reluctant ruler in the show. Although he demonstrates his skills as a leader when the wildlings attack Castle Black, he is hesitant as Lord Commander and later King in the North. Despite Jon telling him not to, Sam nominates his friend for the role of leadership and Jon becomes Lord Commander.

Sam knows that his best friend doesn’t want to be a leader but still nominates him for the good of the realm. It is not the last time Jon is forced into a leadership role as he later becomes King in the North and Varys urges him to press his claim to the Iron Throne.

5. Jon Is Happier With The Wildlings

Jon initially aligns with the wildlings as a double agent, spying on Mance Raydar and his army before fleeing and reporting back to the Night’s Watch. However, Jon grows to care for the wildings and is happier with the Free Folk beyond the Wall than he is with Sam and the rest of the Night’s Watch.

Jon chooses duty over love and abandons Ygritte and the wildlings to return to Castle Black. However, his heart belongs with the Free Folk and he ends the series traveling beyond the Wall with them after being banished.

4. Both Of Jon’s Lovers Have Killed Sam’s Family

Jon Snow has little luck when it comes to love. He falls in love with Ygritte in season three only for her to die in his arms during the Battle of Castle Black. Despite falling in love with Daenerys, Jon kills her after she destroys King’s Landing with dragonfire and takes the Iron Throne.

Both of Jon’s lovers have fought against and killed members of Sam’s family. Ygritte kills Pyp and more of Sam’s Night’s Watch brothers and Daenerys executes Randyll and Dickon Tarly after ambushing the Lannister army.

3. Jon Followed Daenerys After Learning That She Killed Sam’s Family

Sam is distraught when he learns that Daenerys executed his father and brother and urges Jon to challenge her for the throne. However, Jon sides with Dany despite knowing how much her actions hurt Sam, choosing his new lover and queen over his best friend.

Jon eventually betrays Daenerys but it is for Sansa and Arya, not Sam. Tyrion convinces him to choose duty over love once more to protect his sisters as they will not bend the knee to the Dragon Queen.

Jon had moments of arrogance throughout the first season of Game Of Thrones. He congratulates Sam after his friend becomes a steward to Maester Aemon. However, when Jon is also made a steward he reacts angrily, believing himself to be a ranger and above the position of stewardship.

Sam talks Jon into accepting his new role in the Night’s Watch. He tells his friend that Lord Commander Mormont is grooming him for leadership and his prediction becomes true in the show’s fifth season when Jon is elected.

Sam did what was best for the realm when he nominated Jon for the role of Lord Commander. He knew that only Jon would unite the Night’s Watch and the wildlings. However, he also acted for personal gain. He knew that Alliser Thorne would banish Gilly and nominated Jon to remain with her.

Sam made a conscious decision and chose his relationship with Gilly and the Seven Kingdoms over his friend’s happiness. Luckily, Jon was able to unite the realm against the White Walkers and the living defeated the Night King.